I have been really quiet the last two weekends, actually really busy. Today, I am going to share why.   Initially before purchasing the camper, we decided to add a couple of driveway spots by extending our current driveway. One of the main reason for that decision was the fact we just re-built our square foot garden beds this spring.

Once we got the camper in the driveway, I realized how big it actually was  and then Amanda hit one of the bed with her new car, we decided to rethink .  It was decided that we needed to expand the driveway all the way to the road.   I debated and thought about how we could salvage as much or all of the beds.. I also knew that I did not need to worry about the dirt as it was totally useless and needed to be replaced.  The concrete guys offered to move the beds however I was not sure or even hopefully that they would maintain them in one piece so for the past two Saturdays, we have been working.

I ended up paying each kid $10 an hour to help with this huge mass undertaking. With a total of $200 spent to the kids each weekend.  We also needed to build a small retaining wall next to the driveway to prevent dirt from eroding into the driveway.   A third component of this massive project was the square cement pavers that we had place under and around the beds. I was able to purchase most on sale for between 75 cents and a dollar each, however currently they are costing $1.48 each.  We have over 100 of these.

I am so happy to save that we have managed to save all the pavers, move the beds and it actually appears like we plan the whole operation. 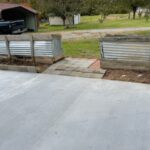 The garden beds have been moved and filled with dirt except for the new sweet potato bed and one last raised bed.  We decided to place two beds directly in front of the house. 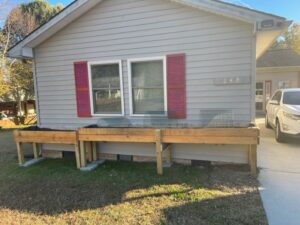 The other beds are currently behind the beetle space.

I have no idea what we actually saved but I am very thankful that the entire project is complete.